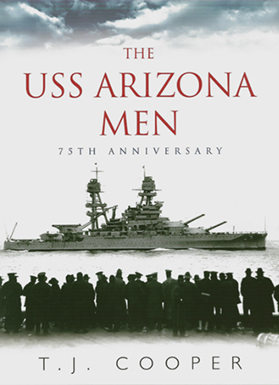 Meticulously researched and masterfully crafted by T.J. Cooper, ‘The USS Arizona Men: 75th Anniversary’ isn’t about the attack or its aftermath, but the valiant men who served aboard the USS Arizona (BB-39) on that fateful day. Having researched each and every serviceman, Cooper takes readers inside their personal stories with a biography and photo for each. It’s the first time such a memorial has been published, hailed by once critic as “…a lasting tribute for each of the 1,512 men whose lives were defined by the attack on Pearl Harbor.”

Coon Rapids, MN – It’s an image etched into the stones of history that will never be forgotten; the USS Arizona sinking following a brutal attack by Japanese forces on the morning of December 7th, 1941. But while the photographs show 29,158 tons of metal flaming, smoking and sinking, it’s easy to forget what can’t be seen – the 1,512 men onboard.
As the 75th anniversary of the attack approaches, historian T.J. Cooper refuses to allow these men to become lost to time. In her ground-breaking new book, Cooper tells each of their stories.
Synopsis of ‘The USS Arizona Men: 75th Anniversary’:
On Sunday, December 7, 1941, shortly before 8 a.m. the men on board the USS Arizona were preparing for Sunday morning services, planning shore leave, writing letters home and visiting with shipmates. Little did they know that the day’s events would forever change their lives.
As the Japanese attacked, this quiet morning turned into a nightmare many would carry with them the rest of their lives. Many more would not survive the devastating attack.
“General Quarters” was sounded and the men scrambled for their battle stations. Within minutes, the men were firing back at the swarm of Japanese planes. Facing, fires, black smoke, explosions and the continual strafing from the Japanese planes, these men remained at their respective battle stations. Many died instantly when a bomb went through the after deck and landed in the black powder room igniting a huge explosion and an immense fire ball that traveled throughout the ship.
Faced with badly burned men wandering about on deck, those men that survived the initial explosion, heroically helped evacuate the wounded all the while dodging the bullets from the attacking planes and the fires roaring about them.
By this time, the fuel oil from the ship’s tanks had escaped and covered the water around the ship. This oil promptly caught fire making “abandon ship” into a treacherous deed. Many of those that jumped were caught up in the fires and fuel oil. This made it impossible to swim to safety.
This book is a memorial to the men that were serving on the USS Arizona that fateful morning. Who were these men and what did they experience. This is their story.
“I wanted to research each of the servicemen’s lives and compile a memorial written just for them,” explains Cooper. “There’s plenty of books out there about their ship, the Pearl Harbor Attacks and even the myriad of conspiracy theories surrounding it – but nothing that asks readers to simply sit down, learn about the men onboard the USS Arizona, and honor their sacrifice. Believe me, these men were far more than a list.”
Continuing, “I spent literally hundreds of hours poring through the lives of each of the 1,512 men in order to construct a biography for them and include any available photographs. It was certainly a long and tiring task, but something that needed to be done. This year is particularly important for the memory of Pearl Harbor and I hope the world gives these men the attention they deserve.”
Since its release, readers have come out in force with rave reviews. Kirkus comments, “An exhaustive compendium memorializing every serviceman assigned to the USS Arizona, destroyed by the Japanese at Pearl Harbor. A well-researched, properly cited and valuable contribution to World War II scholarship.”
Lieutenant Commander Grower from the Naval Historical Foundation, adds, “The USS Arizona Men should not be read as a contiguous history, but rather as a lasting memorial to the men who served aboard BB-39. T. J. Cooper has done an exceptional amount of research to compile stories of each of Arizona’s veterans. This book is a lasting tribute for each of the 1,512 men whose lives were defined by the attack on Pearl Harbor, that “day that will live in infamy.”
‘The USS Arizona Men: 75th Anniversary’ is available now: .

About the Author:
T. J. Cooper was born in 1951 in South Dakota. She grew up listening to her dad talk about World War II and the Korean War. A genealogy researcher for more than 30 years and an avid World War II history buff, she grew frustrated by the lack of military records on men who served their country so valiantly. She compiled individual military records and founded the website MyVeteranFamily.com as a searchable database.
Cooper has also written “The Men of the USS Utah (BB-31/AG-16): The Forgotten Ship of Pearl Harbor” and several family genealogy books. She is a member of the Naval Historical Foundation and a friend of both the USS Arizona Survivors Association and the USS Utah Association. She lives and writes in Coon Rapids, MN.